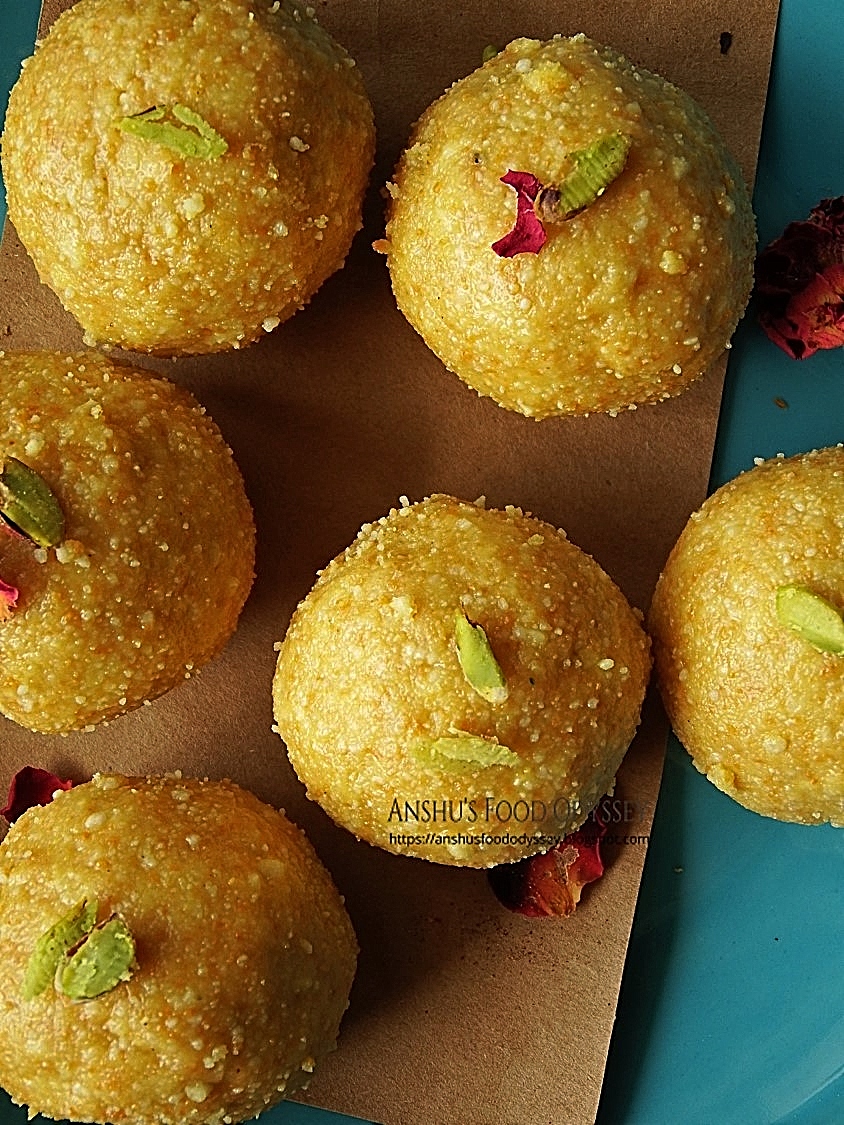 Besan ke Laddoo is one of the quintessential Diwali sweets or mithai recipes  definitely made at our home. Though, these laddoos are made in different styles, sometimes adding sooji and nuts to them, however, the way I like them the best is how the halwais make them - perfect daanedaar made with just three ingredients - besan, ghee and sugar. And trust me, they are an absolute delight, which instantly transport you to a food heaven. So, if you too are a lover of those perfect halwai style daanedaar besan ke laddoo , then this recipe is just for your sorts. Do try them out and I assure, you're gonna love them. Just a few tips before you jump on to the recipe, make sure you use the mota besan aka the coarsely ground gram flour. Essentially, the mota besan is the key to getting that daanedaar texture. Next, never go for the powdered sugar in these laddoos. Always use the boora shakkar/ sugar. And lastly, just when the besan is nicely roasted, sprinkle a few drops of water and stir
Post a Comment
Read more 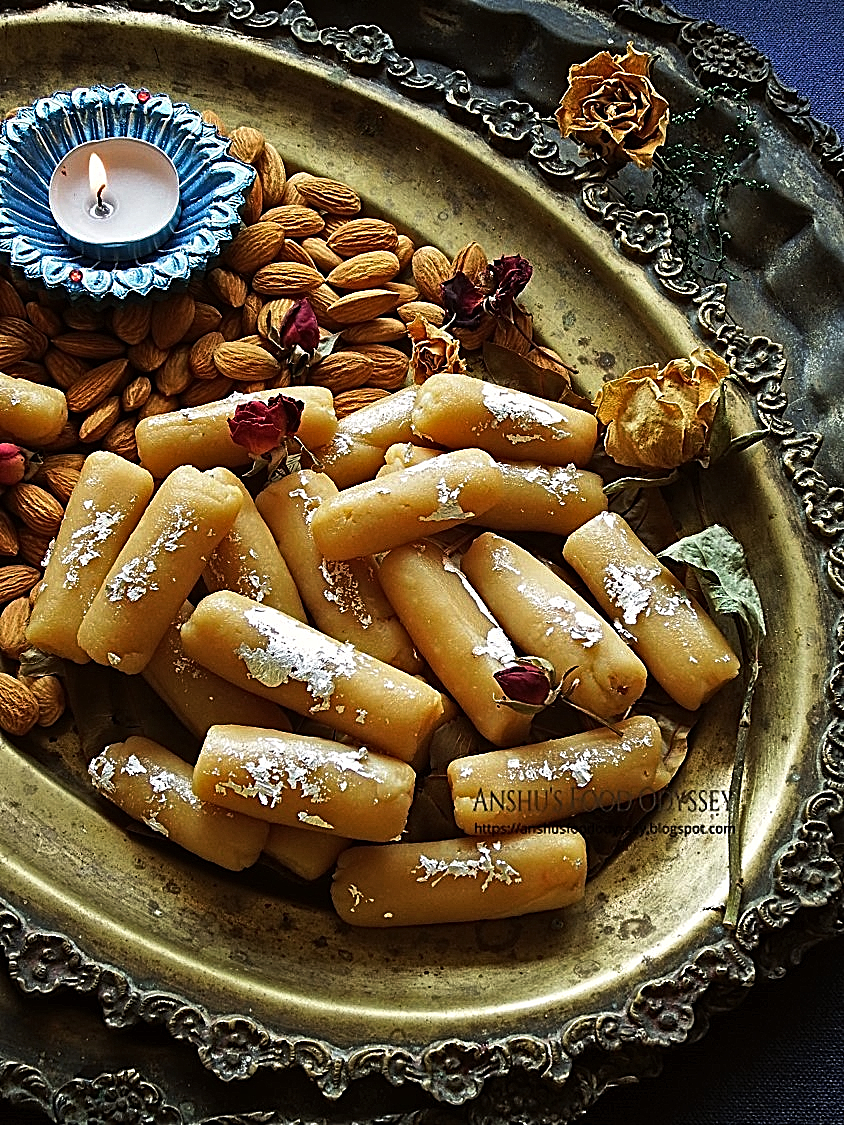 Made with ground almond paste, flavored with caramel sauce, some butterscotch essence and crushed almond praline which provides it with that amazing crunch, these Almond Toffee Rolls are an absolute delight and something that you are definitely gonna relish this Diwali.  Now, some of you may ask, why the name "Toffee"? Well, that's because the caramel sauce and the butterscotch lends it a beautiful caramel toffee flavor...and was named so by my husband because when he tasted it, his first words were like "oh..it tastes like a toffee"...so initially I was about to name them as caramel almond rolls or butterscotch almond rolls but this "toffee" thing actually changed my mind and I named this beautiful sweet as Almond Toffee Rolls. They are very easy to make and require just a few pantry ingredients. So, if you are planning to make something unique for this festive season, do try them out. I am sure you are gonna love them. Let me tell you, they also
Post a Comment
Read more 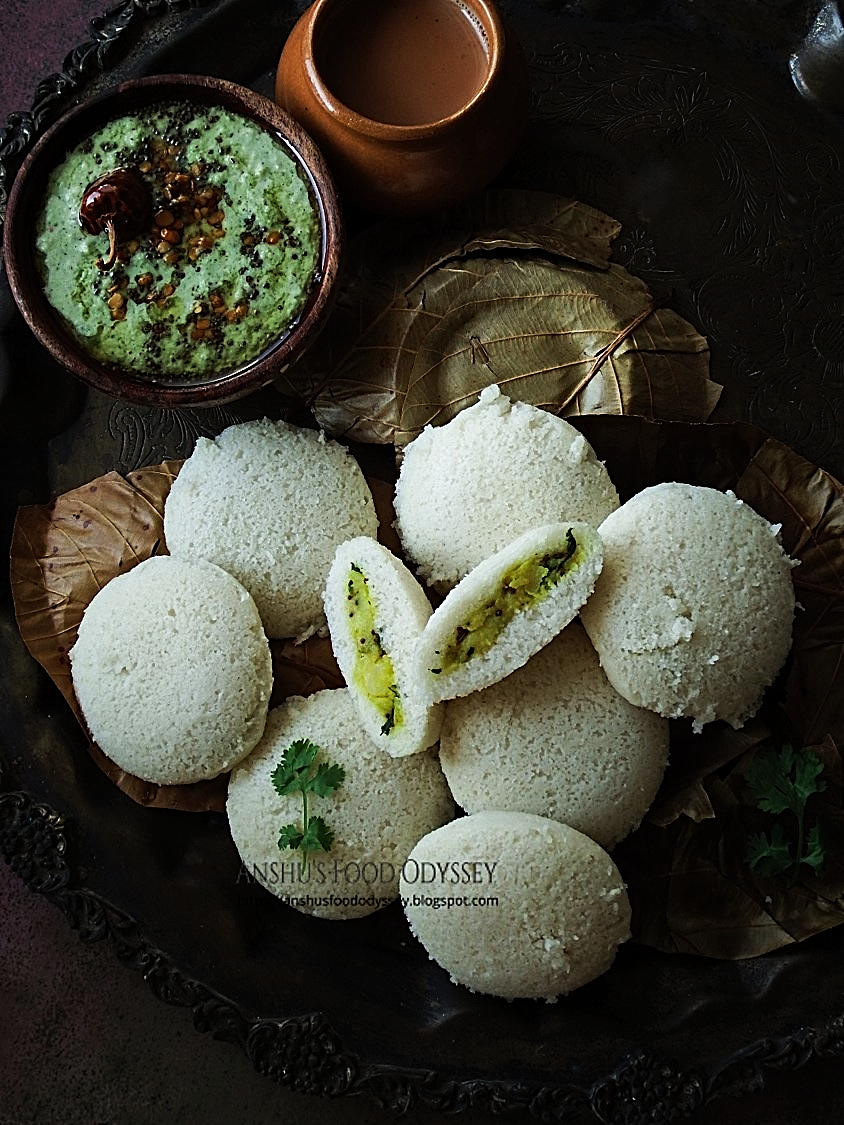 Well, Idli is something that doesn't need much introduction. These steamed rice and lentil cakes are considered one of the most healthiest breakfast options in the Indian cuisine , and therefore have gained quite a popularity all across the country.  While there are many varieties of Idli such as Rava Idli , Moong Dal Idli , Poha or Avial Idli, the authentic recipe that calls for overnight fermentation of ground paste of urad dal and short grain parboiled rice is something that has no comparison. Super soft, pillowy and fluffy, they are best enjoyed with some Sambar and Coconut Chutney on the side. Just to let you know, I already have the recipe of this authentic Rice Idli on the blog, however, I wanted to give this recipe a little twist to satiate my bug for some experimentation... surprisingly came across the batata vada idli by famous Chef Sanjyot Keer on Youtube and was instantly bowled over by the idea. Though he used the rava mixture for the idlis, I, however went ahead
Post a Comment
Read more 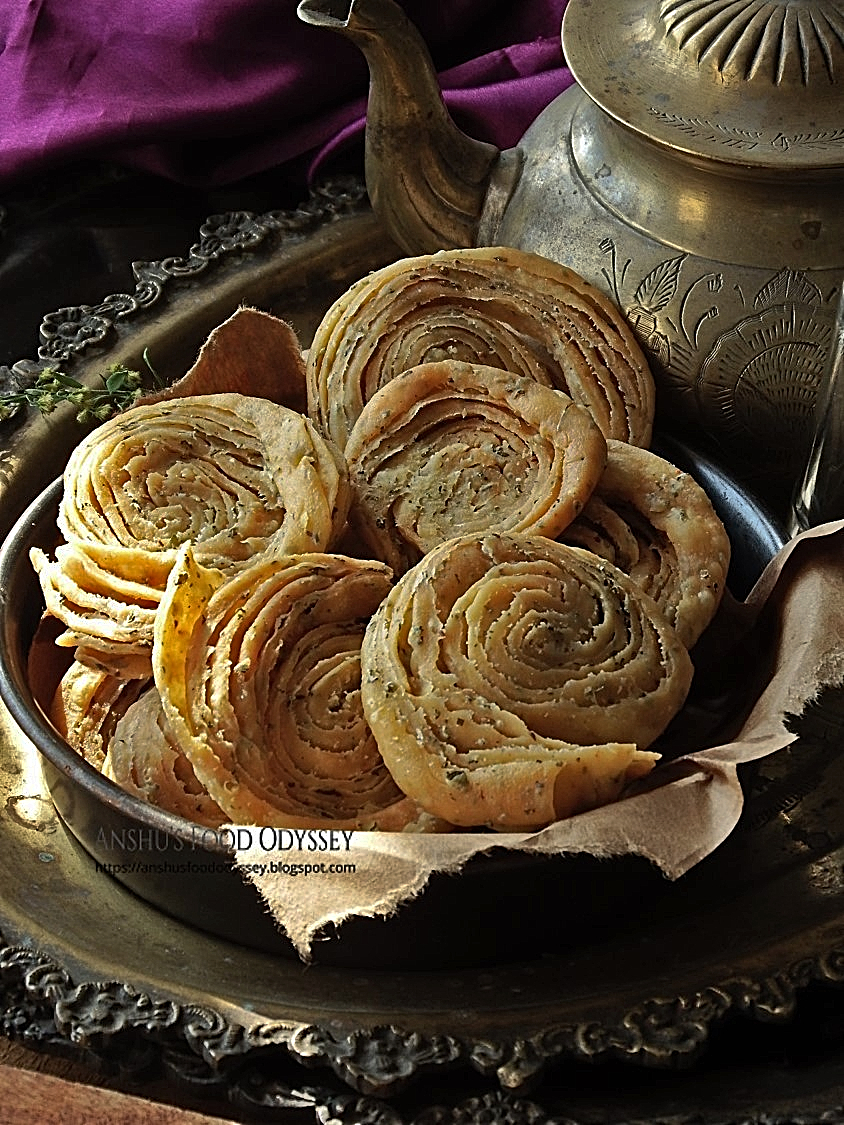 Mathri , also called as Matthi , is bay far one of the most famous and delightful tea time snacks loved by people of all age groups, especially in northern parts of India. Super crisp and flaky or as well we call it khasta , it is one of the must-make recipes at our home during the festive season. While normally, it comes in a circular shape, I tried it to give it a little twist this time by shaping it into spirals and flavoring it with whole lots of dried fenugreek leaves (kasuri methi) to lend it that extra zing. If you too are looking to make some interesting savory recipes this Diwali , do try it out. Though a little time consuming, in the end, it is well worth all the effort... Varki Methi Mathri | Spiral Mathri | Layered Crispy Fenugreek Crackers INGREDIENTS All purpose flour/ Maida - 2 cups Softened ghee - 4 tbsp Salt - as per taste Ajwain - 1 tsp Kasuri methi - 5 to 6 tbsp Red chili powder - 1/2 tsp Crushed black pepper - 1/2 to 1 tsp Chaat masala - 1/2 tsp Softe
Post a Comment
Read more 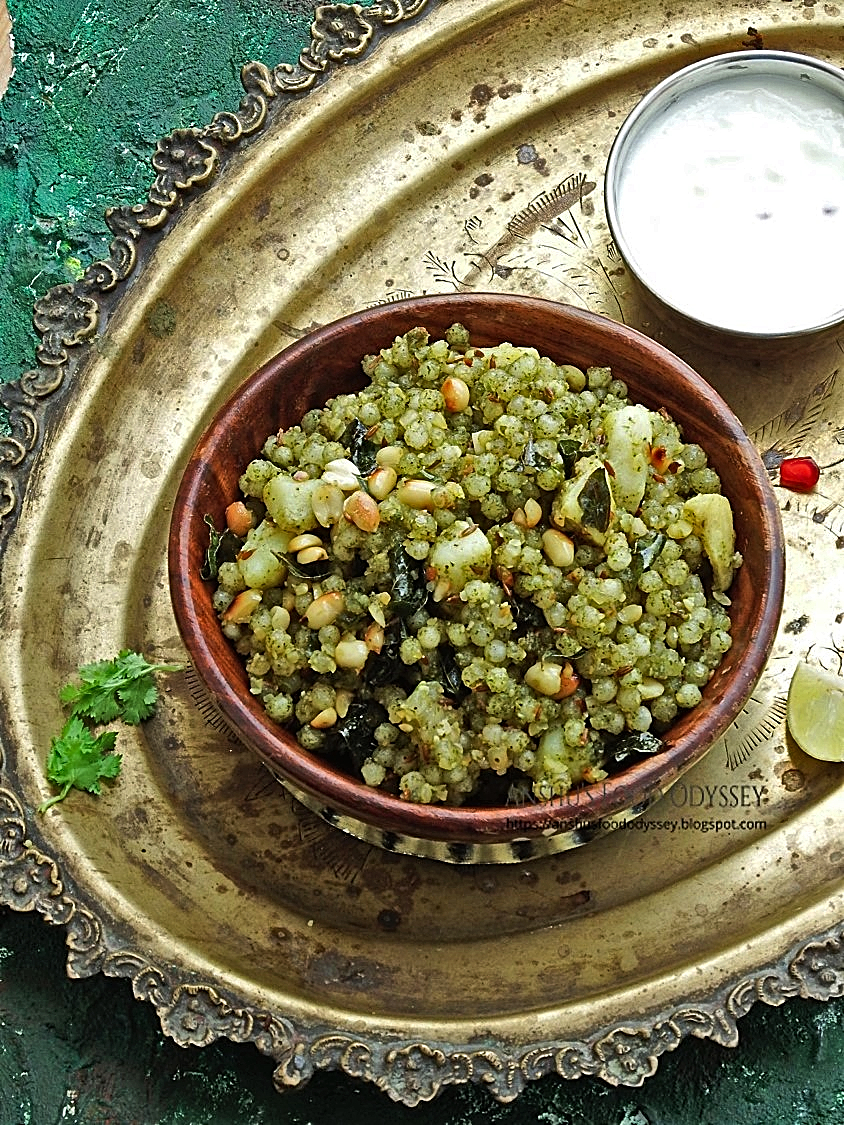 Sabudana ki Khichdi finds its place amongst the most popular Indian breakfast dishes and that is commonly eaten during Navratri and Shivratri in Northern and Western parts of India. Needless to say, the tiny little sago pearls stir fried along with crushed peanuts, boiled potatoes and mild spices are fully packed with carbohydrates and make for a wholesome meal that leaves you energized and pepped up for the full day of fasting. With that being said, this khichdi is so tasty that you can even have when not fasting. Not to mention, it's also a perfect recipe for those who prefer vegan and gluten-free delicacies in their daily diet routine. Now, while the plain sabudana khichdi is undoubtedly quite delightful, this Hariyali Sabudana Khichdi is further more appetizing and packed with the subtle flavors of coriander and mint. Just give it a try and I am sure, you'll be hooked to this version too. Vrat Special - Hariyali Sabudana Khichdi INGREDIENTS Sabudana/Sago
Post a Comment
Read more 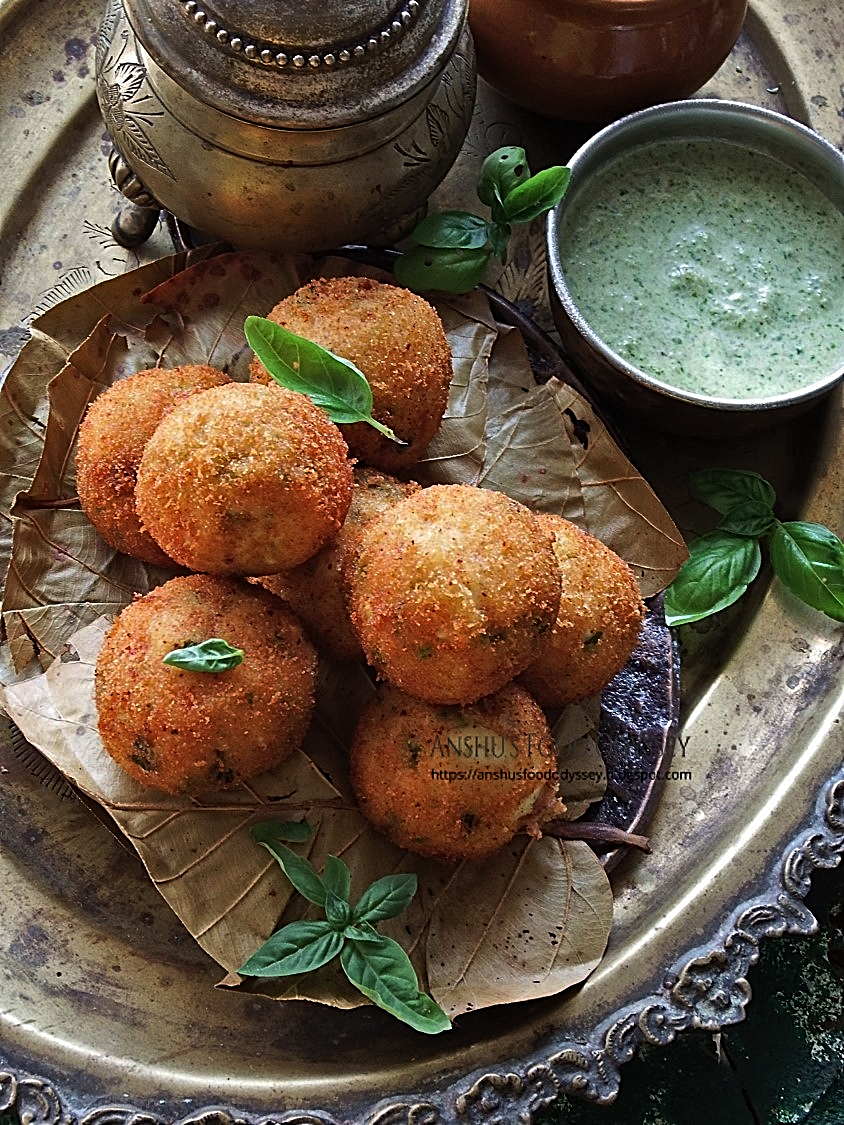 If you ever go to a North-Indian restaurant, you would most often find Dahi ke Kebab listed on top of the snacks & appetizers section. Crispy on the outside and super-soft and melt-in-mouth on the inside with a delicious creamy texture, no doubt, they are every food lover's delight.  Authentically, if you talk about kebabs, you would not find bread crumbs used in them originally. And this held true even for the Dahi ke Kebab because as far as I remember 4 to 5 years back, if we ordered for these kebabs at a restaurant we would get the super soft textured kebabs without a crisp outer shell.  However, with time, I guess chefs modernized and tweaked the recipe a bit to give it that crispiness on the outside, which I believe makes these kebabs even more delectable. So, on the blog, today is that very same modernized recipe of Dahi ke Kebab...do try it out and I am sure you would be hooked to them.   Dahi Ke Kebab | How to Make Dahi ke Kebab | Dahi ke Kebab Recipe
Post a Comment
Read more 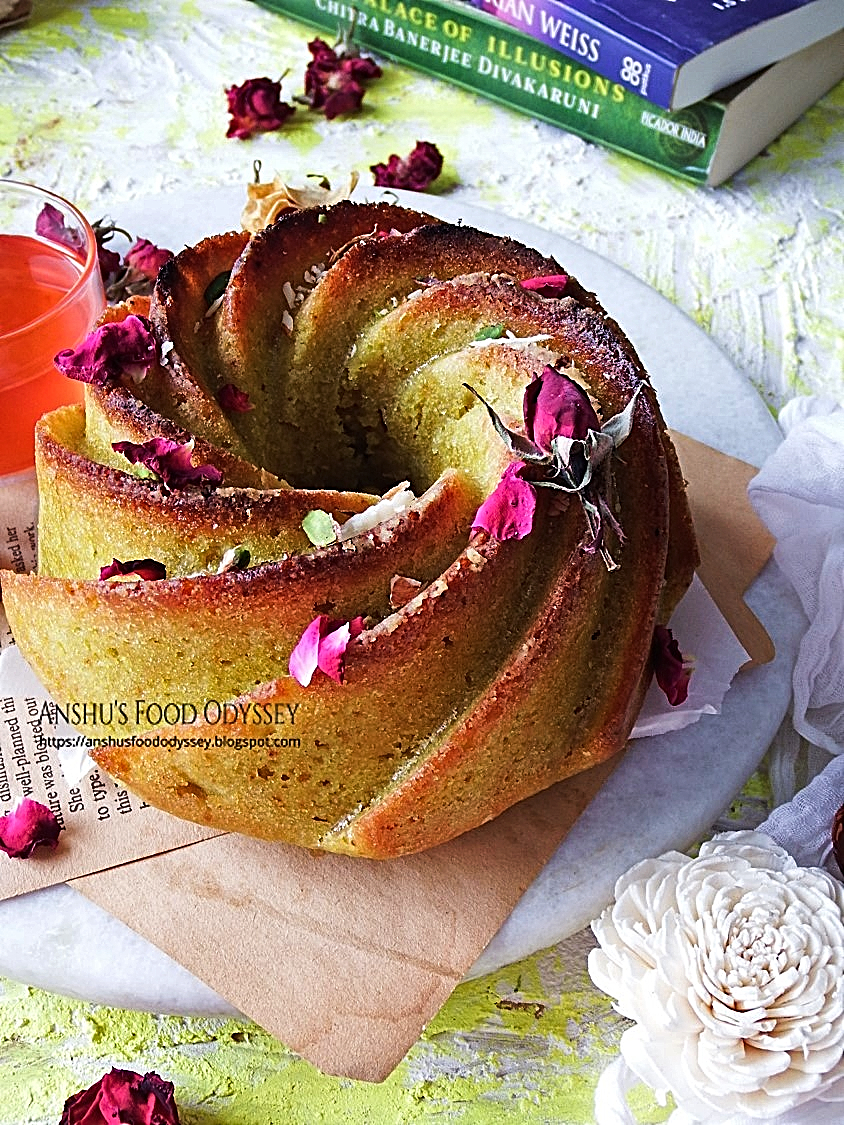 Hi everyone, sorry for being away from the blog for quite sometime...was busy at the workfront so, could not catchup with you all.  Anyways, I wanted to share this post for a while as my gratitude to the lovely sponsors of the BarishKaChaiNashta contest that happened on Instagram a couple of months back. I just casually participated in the contest and to my utter surprise, was declared amongst top 3 winners for the same and was sent a beautiful hamper of Kehwa Tea as a gift by the hosts and sponsors. Loaded with almond flakes, dried rose petals, saffron strands, herbal tea leaves and whole lots of aromatic Indian spices, I was simply bowled over with its fresh, warm and comforting fragrance that decided to come up with an interesting recipe with it. Being an ardent tea cake lover, baking a warm aromatic tea cake with this beautiful Kehwa Tea was something that struck me instantly. The cake came out absolutely wonderful and got over in just under an hour. Still have a packet left o
Post a Comment
Read more
More posts